Ryder Architecture’s cycle team gathered at one of its key UK projects, One West Regent Street, before heading off on a 870 mile UK challenge. 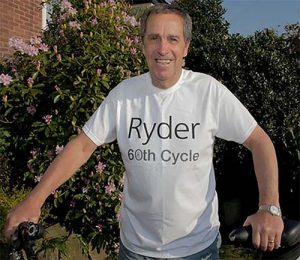 Bobby Moncur backed Ryder’s cyclists as they embarked on the gruelling ten day journey, for charity.

A keen cyclist, Bobby will welcome the team back in Newcastle 10 days later on 20 June.  The former Scotland and Newcastle United captain, said: “It is great to hear of this kind of personal commitment from Ryder’s staff to raise money for charities close to their hearts and 20 years ago I may have tried to join them !

“They started in my native country Scotland and are finishing in my now home city of Newcastle, so I have a real affinity with their challenge. To cycle over 80 miles a day is no small feat.  But for 10 consecutive days it is a massive challenge. I wish them all the best of luck and look forward to celebrating with them on their arrival in Newcastle.”

The 11 staff will cycle roughly 240 miles over three days to London where they will visit the 60th celebration exhibition in the Building Centre.  The last leg is a four day journey north to Cooper’s Studios in Newcastle for a well earned rest.

Paul Bell, Ryder partner and cycle team leader, said “It is a big challenge but the team trained well and is looking forward to a fantastic 10 days.  Having the support of someone as well loved as Bobby Moncur is real inspiration.

“It’s great to be able to do something to support the communities in which we work right across the UK. Staff have really risen to the challenge and are set on raising as much money as possible.”

Heather Manson, capital appeal manager at The Prince & Princess of Wales Hospice, said “We are thrilled to have been chosen as one of the beneficiaries of Ryder’s 60th anniversary celebrations.  It is support like this that will help us to provide Glasgow with a brand new hospice and we wish the team the best of luck as they set off on their cycle challenge.”

Ryder Architecture’s Liverpool team are cycling 7,194 miles for charity from their office to their overseas base in Hong Kong... without moving an inch.

Guests had the chance to be James Bond for the night after Ryder Architecture hosted a casino evening to raise money for Percy Hedley Foundation as part of a joint 60th anniversary celebration.

As part of London Festival of Architecture 2013, we transformed street – from Mortimer Street up to Langham and Foley Street – into a traffic free, pedestrianised design haven for the day.