Every autumn, our new design assistants and designers compete in teams in our internal design competition.  Held at Cooper’s Studios, this year’s design competition consisted of two challenges for which teams had to create innovative solutions, using both artistic flair and problem solving skills.  The first challenge was to design and construct a device to hold three marbles airborne for the longest possible time when released from the second floor into the atrium.  The second challenge involved the design and build of a 1m structure capable of supporting three potatoes and breaking at nine.

I joined Ryder at the beginning of October, with 10 days between my first interview and first day!  I studied a BA in architecture at the University of Liverpool and undertook a work placement at Ryder during the summer between my second and third years, spending three weeks with Team Wise. 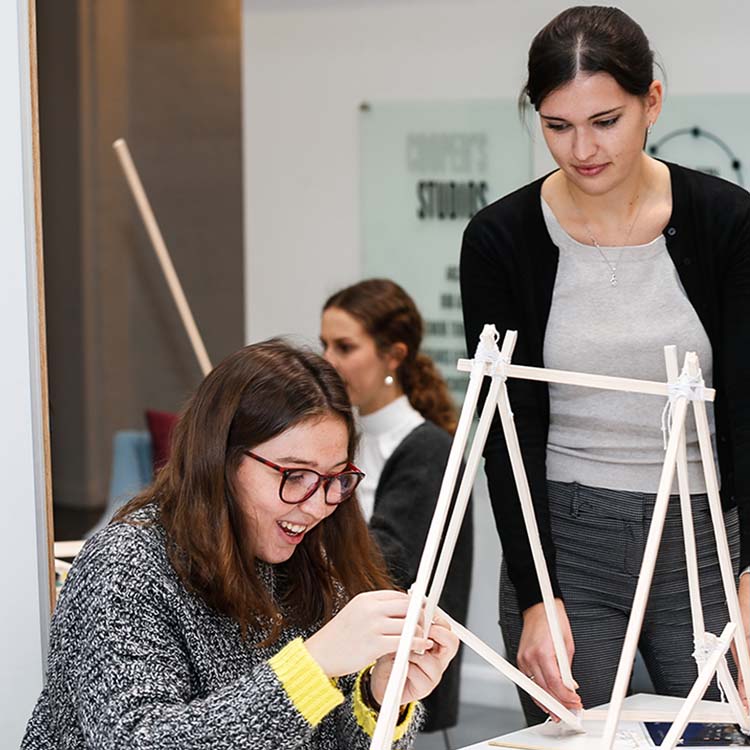 The student design competition gave us an opportunity to collaborate, generate ideas and inspire each other.  My team all came from different disciplines and included a PlanBEE apprentice, an architectural technologist and an interior design student.  Our designs developed through a combination of our varied approaches and experiences.  This way of working gave us an insight into Ryder’s approach, bringing together expertise from varying disciplines at a larger scale to deliver thoroughly considered design.

For the first challenge we were given a range of materials including balsa wood, paper, card and lightweight gauze to devise a transportation device.  Most teams chose to design parachutes, however the winning team thought INSIDE the box!  In contrast to the parachute solutions, the winning team devised a pulley system.  This involved using the cardboard box containing modelling that other materials came in, a counterweight and a series of elastic bands to cause friction, gently lowering the three marbles to the ground floor in just over a minute.

The construction materials used in the second task were balsa wood, thread and minimal amounts of glue.  The sophistication and elegance of the design solution was considered, leading one Tyne Bridge lookalike to be saved from the recycling bin.  The bridge is now displayed by the printer in Cooper’s Studios – despite not breaking until over 15 potatoes had been loaded onto it!

Since beginning at Ryder, I have felt welcome. The first few days are carefully planned to ease you in, starting with an Orientation on a range of topics, including the history of Ryder, which progresses to a three day beginners’ Revit workshop.  The design competition was a continuation of this first week.  It was great to have an opportunity to meet contemporaries from London and Liverpool, reminding us that we are part of a wider team working both in the UK and internationally.  Additionally, the competition was a great ice breaker and I am continuing to keep up with others at my stage in different teams.

Future participants in the competition should prepare to ask questions in order to take in as much as you can and put it into practice.  There is a wealth of knowledge and experience all around at Ryder and utilising that will enable you to make a valuable contribution.

I joined Ryder in early October on my year’s placement from Nottingham Trent University, where I study architectural technology.  When applying for placements, I was drawn to Ryder because of their work values and the fact that they put their people first.  My aims for my year out with Ryder are to expand my knowledge and to learn from people who are in practice and have more experience than me. 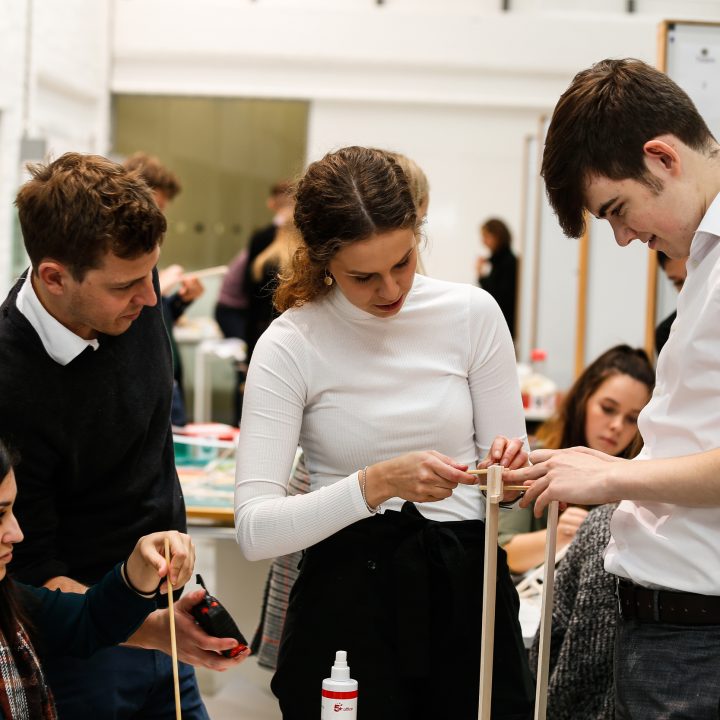 My favourite aspect of the design competition was meeting new people, both from Newcastle and other Ryder locations.  This helped me build valuable links across the practice.  I also enjoyed taking problems that had links to architecture and thinking of unusual or unexpected solutions that stretched the brief.

A lot of ideas to solve the first task involved making a parachute.  However, after some brainstorming, my group decided on an alternative solution that was a mix of a lift and a friction sliding aid.  To execute this, there were two main parts.  The first was a box that contained stretched out elastic bands with a string threaded alternately between each band to create the friction that slowed the marbles.  The second part was a basket that held the marbles and had a string attached to the thread through the elastic bands in the box.  The string attached to the basket was only just long enough so that when the marbles would reach a foot off the floor they would drop, meaning that they were not attached to the top of the mezzanine.  This resulted in a time of one minute and eight seconds, compared to the maximum of six seconds from the other teams.

The ideas for the second challenge were amazing, with one Da Vinci bridge that held very well.  My team decided to create an over engineered bridge that would easily hold any amount of potatoes, then engineer in a breaking plate that would hold the weight using a hook.  This plate would span the middle of the bridge across two dowels.  This meant we had a small sized plate holding all the weight which we could test multiple times, confirming it would break at nine potatoes. The breaking plate was tested so that it broke at exactly nine potatoes and was the only one to do so out of all the teams.

I felt that I and everyone involved in the competition was welcomed very well by other participants, we all seemed to get along.  Those not involved in the competition at Ryder were also very welcoming and easy to talk to.  The competition has helped me settle into Ryder as it encouraged everyone to meet people outside of their close team, whether they be from Newcastle or another location.  It was therefore important to get involved and talk to / interact with as many people as possible and attend the meal and drinks afterwards.

Thank you to Ryder for this opportunity.

The Ryder development competition winners discuss their experience of the annual competition held at Cooper’s Studios.

Fennella Nkansah and Jing Tan reflect on their experience of the week and lessons learnt.

At the end of the first PlanBEE rotation, students Rian Lamb, Jordi Morris and Aaron Soulsby share an insight into their experiences at Ryder.